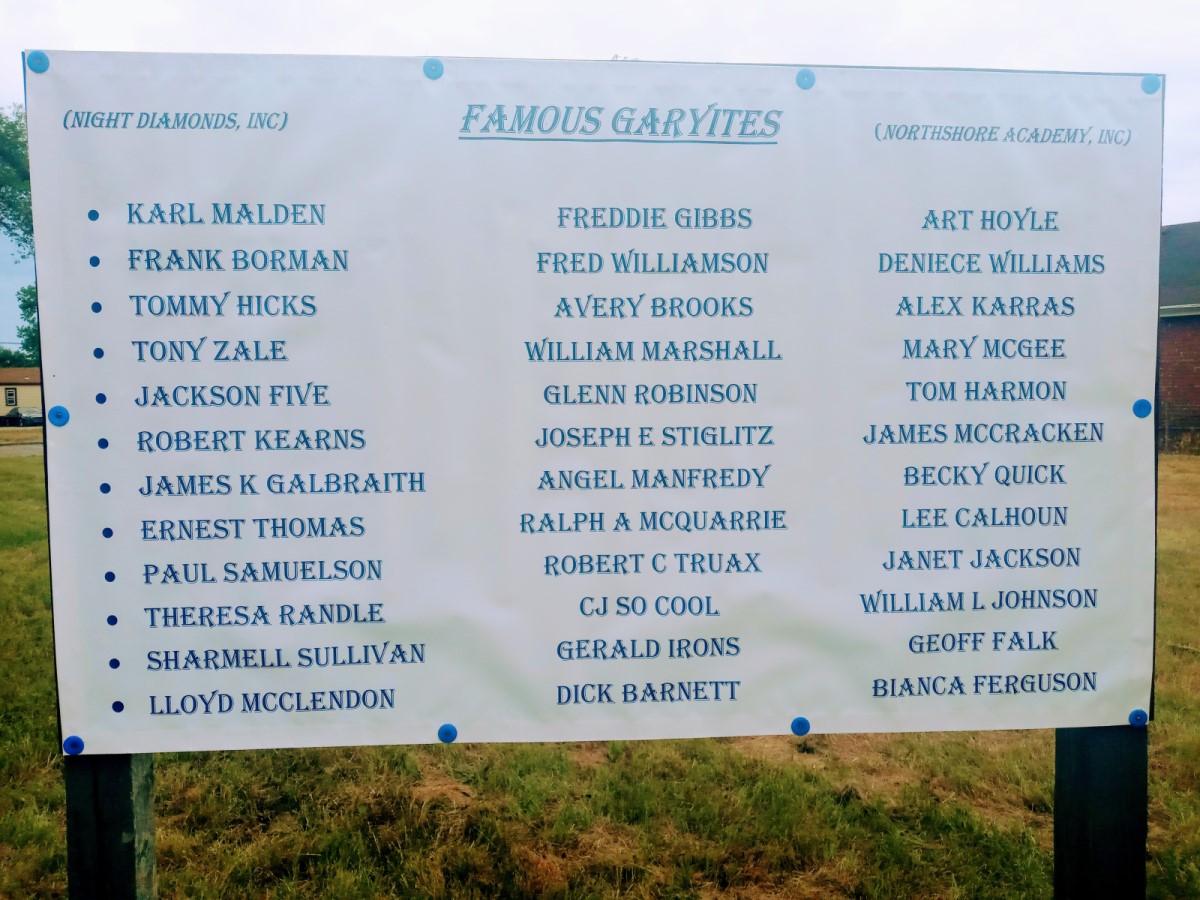 TOMMY HICKS - An actor and director in Film and Television

EARNEST THOMAS - An actor, producer and screenwriter in Film and Television

LLOYD MCCLENDON - One of the all-time greatest Little Leaguer. Led Gary to
championship game against Taiwan. After hitting multiple
home runs, was intentionally walked the rest of the game.
Professionally, he became a solid MLB manager, coach and player

JOSEPH E STIGLITZ - Economist and professor. Received the 2001 Nobel Prize
in Economics. Known for his pioneering work on asymmetric
information

RALPH A MCQUARRIE - Academy Award recipient, is a conceptual designer and illustrator.
His career included work on the original Star Wars trilogy, and
the original Battlestar Galactica tv series and the film Cocoon

CJ SO COOL - Musical Artist You Tube Star and entrepreneur

ART HOYLE - Renowned Trumpeter and musician earned worldwide admiration. Worked with the
Lionel Hampton Orchestra and some of the greatest musicians of our time
including Lee Konitz, Gene Ammons, Ella Fitzgerald, Sarah Vaughn,
Woody Herman, Billy Eckstine, Frank Sinatra and many others.

DENIECE WILLIAMS - Four time Grammy Award winning singer, songwriter and producer. She has
been described as"one of the great soul voices" by the BBC, and had
two Billboard Hot 100 No.1 singles "Let's Hear It for the Boy" and
"Too Much, Too Little, Too Late" (with Johnny Mathis).

ALEX KARRAS - NFL player, professional wrestler, sportscaster, and actor. He was a
four-time Pro Bowl player with the Detroit Lions. As an actor, Karras played
Mongo in the 1974 comedy film Blazing Saddles. He is a member of the College
Football Hall of Fame and was elected to the Pro Football Hall of Fame.

MARY MCGEE - Mary Ann McGee is a champion professional boxer. She has held the IBF female
junior welterweight title since 2019. Known as "Merciless", mission statement
that reads “One Dream, One Passion, One Mission to be the greatest”

TOM HARMON - led the nation in scoring and was a consensus All-American and won the
Heisman Trophy,the Maxwell Award, and the Associated Press Athlete of the Year
award in 1940. He was inducted into the College Football Hall of Fame in 1954.
He was a military pilot, actor, and sports broadcaster.

JAMES MCCRACKEN - Was an opera singer, who was the most successful dramatic tenor
yet produced by the United States and a pillar of the Metropolitan Opera
during the 1960s and 1970s.

BECKY QUICK - Television journalist/newscaster and co-anchorwoman of CNBC's financial
news shows Squawk Box and On the Money. Was a Former WSJ reporter & Fortune
columnist and Finalist Judge for Loeb Awards.

JANET JACKSON - Five time Grammy Award winner Singer, songwriter, actress, and dancer.
The youngest sibling of the famous Jackson family, she holds the
record for the most consecutive top-ten entries on the US Billboard
Hot 100 singles chart with 18.